This article first appeared on June 22, 2017, on the UCSB College of Engineering webpage.

Materials scientists around the world are working to develop “superconductors,” materials that can conduct electricity with zero resistance when cooled to a critical point known as the “transition temperature.” At that point, electrons flow across the material with 100-percent efficiency, meaning no other form of energy — heat, in particular — is released in the process. Superconductors would enable tremendous efficiency gains in power transmission, dramatically expand bandwidth for cellular devices, and support innovation and greatly increased performance in a range of electronic applications.

The 1987 Nobel Prize for Physics went to two Swiss scientists for their discovery of a class of “high-temperature superconductors,” but the transition temperatures of those materials are still low enough to require cooling by liquid nitrogen to enable superconductivity. The holy grail that scientists seek is a material that becomes superconductive at room temperature. 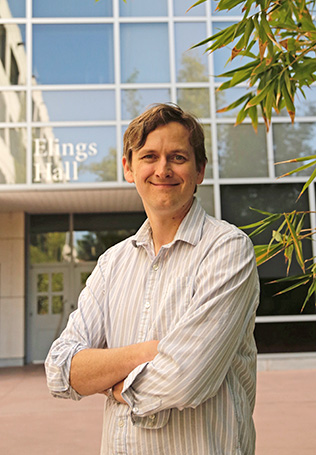 Stephen Wilson, an associate professor in the Materials Department at the UCSB College of Engineering, is among those trying to develop such materials. He recently co-authored a paper in the journal Nature Materials titled “A charge density wave-like instability in a doped spin-orbit–assisted weak Mott insulator.” It describes promising work with one such compound: strontium iridium oxide (Sr2IrO4).

Wilson and his collaborators are working at the electron level to develop a new class of materials that generate new types of electronic behavior. In a laboratory setting, his group was part of the first team to generate pulses in doped Sr2IrO4, indicating that electrons retained their organization as the material changed from an insulator to a conductor. Such an unusual metal could be a precursor to a superconductive state.

“These materials exist at a new frontier of the condensed matter of physics, in which the electrons have multiple different energy scales, or magnitudes, driven by different competing sources,” he said.

One of those scales belongs to the study of correlated-electron physics. It is concerned with the extent to which electrons in the crystalline structure of a material interact with, or “see,” one another and the characteristics that arise from such interactions. Strongly correlated materials include insulators and conductive materials that show unusual, often technologically useful electronic and magnetic properties. Such materials may exhibit the ability to transition from being an insulator to being a conductor when manipulated by very slight magnetic or electronic fields — suggesting eventual potential replacements for today’s conventional semiconductors. Wilson’s group manipulated Sr2IrO4 by doping it with lanthanum to add electrons and incite the desired transition from an insulator to an exotic metal.

The other energy scale that comes into play with strontium iridium oxide and similar iridates is strong “spin orbit coupling.” That refers essentially to the interaction that may occur between a single electron as it orbits the nucleus, and that electron’s “inherent magnetic moment,” or “spin.” The associated energy arising out of this coupling can dramatically change a material’s electronic properties.

The researchers are working with a group of transition metals that have relatively high atomic numbers, so they have a heavy nucleus (many protons) and strong spin orbit coupling. That, combined with their inherent correlated-electron effects, make them ideal candidates for doping new types of insulator-conductor transitions. “This regime, where you have a strong spin orbit coupling and electron correlations, is at the forefront of materials physics, where a lot of new states are being predicted,” Wilson explained. “Some of them may include new forms of high-temperature superconductivity.”

To test the materials, the researchers mixed the constituent powders and grew a crystal of strontium iridium oxide. They then replaced strontium sites in the crystal lattice with lanthanum ions at a replacement level of four percent. “That adds electrons, which turns the material from an insulator to a [conductive] metal,” Wilson explained.

They then grew crystals having different concentrations of lanthanum and charted the response. Wilson explained what happens when electrons are introduced via doping, causing electrons to interact with each other: “Sometimes, they want to self-organize into a pattern, and that pattern is just a shift in the density of electrons in the crystal. Collaborators at Cal Tech saw that in this metallic state, the electrons were correlated; they were organizing with one another. That’s what we wanted to show, that the correlations remained as the material changed from an insulator to a conductive, metallic state, because if that’s true, you can realize even more unusual forms of electronic order.”

“The Cal Tech team basically hit the material with light and watched how it was reflected from the sample as a function of time,” Wilson said. “They saw a wiggle that decayed as a function of time. That wiggle is a fingerprint for a self-organized electronic state called a charge density wave.” As doping increased so that more electrons were added, the charge density wave turned on at higher and higher temperatures.

Wilson said this was the first time such a charge density wave has been shown in this new class of materials, adding, “It provides promise for the field because it shows that you can get correlated metallic states beyond the insulating phase of these materials.”